The story of the iconic Norman Cherner Armchair 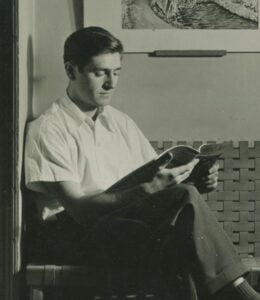 In this week’s blog, Furnish Plus is excited to introduce to our readers a designer that is not coming from Denmark (surprise!), our favorite American designer – Norman Cherner with his iconic Norman Cherner Chair.

Norman Cherner was born in 1920. He studied at the Columbia University Fine Arts Department and was an instructor at the Museum of Modern Art in New York for roughly two years, from 1947 to 1949. The Bauhaus movement played an impact on the designer’s inspiration and soon delved into his style of design, becoming a lifetime exploration of interdisciplinary design, from household appliances to furniture to his innovative work in economically built housing. At the beginning of his career, Norman visualized houses as a total design concept and designed furniture at affordable prices. One of his first constructed houses for the U.S. The Department of Housing was designed, produced, and assembled in 1957 and exhibited in Vienna. Soon after,  it was moved back to Connecticut and uncrated to become his first studio and home. 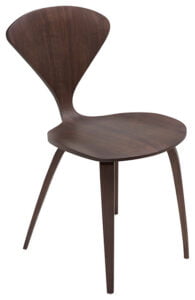 Norman Cherner, like his fellows Charles and Ray Eames and the Danish Arne Jacobsen, continued the creative ventures with the technique of bent plywood developed by the Finnish Alvar Aalto. The molded plywood seating dining chairs Cherner is best known for. It was in 1950 that Norman Cherner found his aesthetic maturity in furniture design, creating this icon of twentieth-century design that is the Cherner Chair.

And like every other iconic item, the Norman Cherner Armchair also has its own fascinating story.

In the 1950s, the Herman Miller company, with George Nelson as the chairman, was figuring out ways to carry out lightweight chairs made of plywood. Their Pretzel chair was designed by Nelson’s office in 1952 and produced by a Massachusetts-based company called Plycraft. The Pretzel chair proved too fragile and costly, so Herman Miller stopped production in 1957.

But also because of the Pretzel chair, Plycraft had the materials and techniques for constructing plywood furniture, and they didn’t want them to go to waste. George Nelson recommended that Norman Cherner design a sturdier and more affordable Pretzel-type chair that could be more easily produced on Plycraft’s equipment, so Paul Goldman, the owner of Plycraft, hired Cherner, contract and all. After Cherner turned in his design to Plycraft, though, he was told the project had been scrapped. 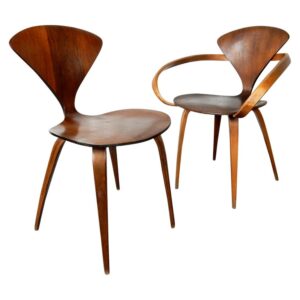 Not long after, Cherner was in a furniture showroom in New York and saw his design for sale! Examining the label, he saw it was from Plycraft and was attributed to “Bernardo.” He sued Plycraft in 1961 and won; Goldman admitted that Bernardo was a fabricated name. Plycraft continued to produce Cherner’s chair, but Cherner received royalties and proper credit. The chair was produced until the 1970s, but Cherner’s sons have recently reissued their father’s original designs, not only for the famous chair but also for various tables and case furniture, as well. Although now known as the Cherner chair, the chair is occasionally still attributed to Paul Goldman, and is also sometimes called the Rockwell chair, because Norman Rockwell featured it on a 1961 cover of the Saturday Evening Post – “The Artist at Work”, which made the cover of the Saturday Evening Post. The owner of Plycraft claimed for a long time that he had designed them himself, producing them under his name until a court of justice condemned him to pay royalties to Norman Cherner in the early 1970s.

The Cherner Armchair and Counter Stool are comfortable and resistant despite their visual lightness, both of the products are available in a multitude of wood finishes that include 2 walnut versions: “natural walnut” and “Classical Walnut”. Natural walnuts have a clear topcoat where the natural variations in the color and the grain of the wood are clearly visible. No stain or color enhancements are used. Classical walnuts use aniline dyes and water-based low VOC varnishes, which produce a finish where the natural grain texture of the wood is clearly visible with uniform color throughout. The Cherner chair & armchair are available with a back or/and seat pad. 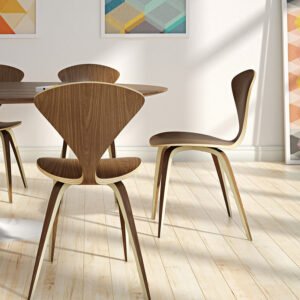 A newly updated kitchen deserves a fresh, contemporary look that Origins by Inmod’s Norman Cherner Armchair offers with little effort. The modern counter stool is defined by its distinctive back design that offers both striking visual appeal and surpassing support. The curvaceous design of the backrest continues into the seat and even through the legs for a soft, natural look. The seat and legs are constructed from molded veneered plywood for long-lasting strength while a stainless steel footrest is resistant to potential wear and tear. A variety of veneer color and finish combinations give the minimalist Norman Counter Stool personality while creating a look that blends flawlessly with your home’s existing décor.

Both of the Norman Cherner Side Chair and Stool are now available on Furnish Plus website:

END_OF_DOCUMENT_TOKEN_TO_BE_REPLACED

Poul Kjaerholm to the most successful PK Series

END_OF_DOCUMENT_TOKEN_TO_BE_REPLACED

Tips for Creating an Amazing Dining Room Of all the rooms in the house, the dining room is one of the most used. Therefore, it makes perfect sense to ensure that this room looks amazing. I...