How did Poul Kjærholm die

It’s another Friday my dear readers, and I cannot be more joyful to introduce you Poul Kjaerholm and his famous PK series that inspires many of us until these days!.

The mid-century modern design style emerged in the middle of the 20th century and became one of the most popular design styles in the world. It was a design movement that brought modernity to the masses and even after 70 years continues to inspire designers to this day. Mid-century modern introduced a completely new and radical way of designing living spaces promoting functional open and uncluttered interiors. 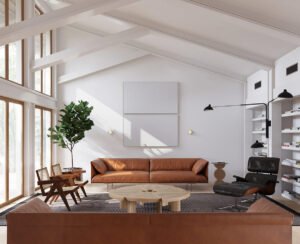 But mid-century modern is also much more than just a design style, it represents breaking free from the oppressions of the world wars rejecting stuffy traditions, and embracing new and modern ways of life. This beautiful streamlined aesthetic actually has some of its roots in Germany’s Bauhaus style and also has strong ties to Scandinavia. Scandinavian designs are actually very similar in style and that’s because they developed at the same time in history and the designers also heavily influenced each other. True century modern designs are timeless which explains why so many pieces that were designed over seventy years ago today are still Wild popular and are still being manufactured and sold.

Poul Kjaerholm is the designer of some of the most industrially innovative and perhaps most timeless designs of Fritz Hansen, the original furniture maker of the most mid-century modern Danish pioneers, has ever created. Poul Kjaerholm was born in Northern Jutland in 1929 and moved to Copenhagen in 1949 to study furniture at The School of Arts and Crafts. When he moved to Copenhagen, he was lucky enough to fall under the education of Hans Wegner, the master of the most iconic Wishbone Chair. Wegner believed that furniture should be beautiful from all angles, and more than anything that the head craft techniques involved should be visible Let’s look at one of the very early chairs that Kjaerholm designed, the PK25.

It was actually the work for his graduation project from the school of Arts and Crafts in 1951.  When we see the chair from above we can see that he’s effectively taken a single piece of steel which can be expanded to create the legs, the back. The soft elements of the chair are created by using a single 19 length of flag line rope. During his studies in Copenhagen, the school of arts and crafts, Poul Kjaerholm also attended the Kaare Klint’s seminars at the furniture school of the royal academy. Klint believed his students should always look back before moving forward. What he meant by this is that in fact,  there were thousands of beautiful functional chair forms that existed already. So, in stepping into the new world in the twentieth century, it was important for students to be open to influences from older chair types. This idea resonated with Kjaerholm that we can see in fact with the element chair, the PK25, that when looking at the chair from the side, the legs expand both forwards and backward which recalled the ancient Klismos chairs. The chair was displayed in 1952, and after Soren Hansen saw the chair he decided to employ Poul Kjaerhom at the Fritz Hansen. Soon after arriving at Fritz Hansen, Kjaerholm was invited to work with this new plywood material, and in doing so, he created the PK0 chair that put the premise to his phenomenal work for the PK 24 and PK22 later on.

In 1955, Kjærholm met Ejvind Kold Christensen with whom he created an incredibly productive work in partnership which continued until the rest of his life in 1980.

PK 22 – the oldest brother in the series 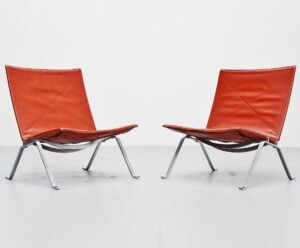 The first collection of furniture released with Kold Christensen in 1956 included the PK22 Lounge Chair and the PK61 Coffee Table. The PK22 was particularly interesting because it’s effectively built up from simple strips of steel so when we see the legs from the side, we can see that the legs fastened to the frame beneath the seats with machine screws called “Allen” screws or “Unbrako” screws. These are very industrial-looking components. But Kjaerholm saw in them the potential to be able to join the strips of steel, much in the same way that woodworkers would use joins to create strong bonds in wooden furniture. During the mid-1950s, Kjaerholm designed a number of modular sofas, including the PK31 sofa. And if we’re looking at the details of the sofa, we can see its construction continues the idea with the machine screws from the PK22, but expands it with a very detailed, upholstered construction, which is beautiful not just from the top to bottom, but in fact in the upholstery within the sofa, where we can see the same level of craftsmanship applied.

In 1957 Kjaerholm designed his famous PK80 daybed, perhaps as one of his best-known works. The daybed takes a very simple rectangular form, constructed in leather, and combines it with a plywood base which is fixed to the steel frames by choosing simple rubber rings. The advantage of using this form of construction was that the wooden surface could move slightly at the point where it made contact with the steel frame. If it had been screwed in place, the chance was that it could be broken or cracked. 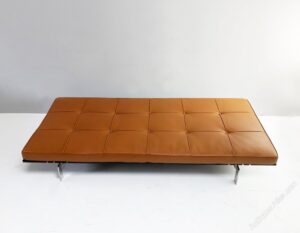 Poul Kjaerholm normally spent an entire year on a single piece of furniture. The PK9 is a great example. The story goes that his wife left an imprint in the sand on the beach which Kjaerhom recognized as the perfect seat form. He later asked Hanne, his wife to sit in containers of clay in order to make molds to create the perfect dining chair form. What Kjaerholm then did was use repeated strips of spring steals to create support for the human form. The fact that the chair legs open outwards onto the floor draws attention to the wider space.

PK24 – a chaise lounge that cannot be more comfortable

In 1965, Poul Kjaerholm developed the PK24 chaise lounge. The interesting thing about the PK24 is that it’s, effectively, a kind of hammock chair. What he does is use the friction between the steel cradle and plinth to be able to adjust the chair, this means that the user can adjust the chair and sit comfortably at a variety of angles. As ever, the designer seeks the simplest profile possible in his furniture, by choosing woven seats he was able to illustrate his fascination with the inherent One of Poul Kjaerholm’s later lounge chairs is the PK20 Lounge Chair, which takes a classic cantilever form, but transposes it and blends it with the form language of the PK22 to make a much lower, more comfortable seating experience. The idea with the PK20 is that Kjaerholm and Kold Christensen could use up strips of leather from the construction of the PK31 and PK22. The hope was that it would make an economical form of production. In reality, of course, the time taken to produce these strips of leather and to create the seat negated any time that was saved by using recycled leather. Kjaerholm believed the materials of his furniture should be the star of the show. Although he is an incredibly innovative and ingenious designer, to his death, he maintained that it was the materials and surfaces that were more interesting than the designs themselves.

All of the PK series are now available in various options of leather at: https://furnishplus.ca/

Invasion Of Cloud Sofa   Have you recently felt like Google is spying on you? They always do, but we (I) mean on a more over-necessary basis? Did you see advertisements for this bright white, extra...

END_OF_DOCUMENT_TOKEN_TO_BE_REPLACED

The story of the iconic Norman Cherner ArmchairIn this week’s blog, Furnish Plus is excited to introduce to our readers a designer that is not coming from Denmark (surprise!), our favorite American designer -...