* All measurements of the Pavilion Daybed are approximations.

Designed in 1930, the Pavilion Daybed, originally known as the Barcelona Daybed, shares the same uncomplicated sophistication as the iconic bench of the equivalent name. The piece comprises clean geometrical forms and a slender design profile. The exclusive upholstery is hand-sewn from individual squares of leather and the simple and cylinder-shaped headrest complements the streamlined image. The look is rounded off by four unobtrusive legs, which make up the sturdy base of the day bed. The padded upholstery of the Pavilion Daybed makes it an extremely cozy and comfortable lounger.

The daybed with its generous space is ideal for an afternoon lounge or adorn an office reception and lobbies beautifully. Multifunctional while maintaining its refinement and grandeur.

FurnishPlus produces this iconic design in quality top grain, aniline, or vintage leather upholstery in a variety of colors, with stainless steel legs and an American walnut frame. 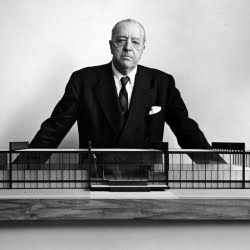 Widely regarded as one of the pioneering masters of modern architecture, Ludwig Mies van der Rohe inherits the title as the ‘Father of Bauhaus’ for his intensely modernist vision and art deco form of expression. Born in Aachen in Germany in 1886, Mies sought to establish a new architectural style representative of modern times, similar to the impact Classical and Gothic conjured for their own eras. He constructed an influential and inspirational twentieth century architectural style, stated with extreme clarity and simplicity.Bound by the ethos of ‘less is more’, Ludwig Mies van der Rohe created aesthetically compelling work, simple in appearance yet holding a unique beauty to any observer or art lover. Expanding his craft from architecture to furniture design, German-born Mies undertook the majority of his career living in the United States, before his passing in Chicago, 1969.The influence and inspiration generated by Mies resonates to this day and his work is championed and celebrated on a worldwide scale. The Ludwig Mies van der Rohe Archive, an administratively independent section within the department of architecture and design at MoMA New York, was established in 1968 by the museum's trustees, while the National Gallery in Berlin and Museum of Fine Arts in Houston are among some remaining examples of his architecture, testament to his significance.
Reviews (10)