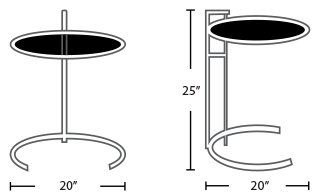 *All measurements of the Eileen Gray Side Table are approximations.

Designed in 1927, the table takes its name from Eileen Gray’s summer holiday house, E 1027 – Maison en Bord de Mer. This became one of the most popular design icons of the 20th century, included in the permanent collection of MoMA. Gray wanted a table that can be utilized as a side table and also be used “over her knees” while sitting. The cantilever table top creates a floating visual and the ability to cater to you wherever you’re sitting.

Adjustable height with chrome polished plated tubular steel frame, the top can be raised to various heights. Its ingenious proportions and distinctive form have made it a sought-after piece for the home or office. The symmetry of the forms and innovative design create the artistic look of this piece. It is compact and the height is adjustable, which makes it a functional table for any occasion.

Furnish Plus produces a classic design with a clear glass tabletop and a chrome frame.

More Side Tables from Furnish Plus. 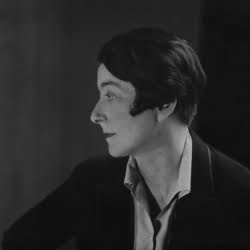 Kathleen Eileen Moray Gray was born as Katherine Eileen Moray Smith on 9 August 1878, near Enniscorthy, a market town in southeastern Ireland. Her father, James McLaren Smith, was a painter who encouraged his daughter’s artistic interests. Her mother was EveleenPounden, a granddaughter of the 10th Earl of Moray; she became the 19th Baroness Gray in 1895, upon the death of her own mother, née Lady Jane Stuart. After that, Lady Gray, who had separated from her husband in 1888, changed her children’s surname to Gray.In 1898, Gray attended classes at the Slade School of Fine Art, where she studied painting. While there, she met Jessie Gavin and Kathleen Bruce. In 1900 her father died and she went on her first visit to Paris with her mother where she saw the Exposition Universelle, a World’s fair that celebrated the achievements of the past century. The main style at the fair was Art Nouveau and Gray was a fan of the work of Charles Rennie Mackintosh, which was on exhibit. Soon after, Gray moved to Paris along with her friends Gavin and Bruce from the Slade School. She continued her studies in Paris at the Académie Julian and the AcadémieColarossi. For four or five years after the move, Gray traveled back and forth from Paris to Ireland to London, but in 1905, due to her mother’s illness, she settled back in London. She rejoined the Slade but found her drawing and painting courses were becoming less satisfying.
Reviews (9)

9 reviews for Eileen Gray Side Table