* All measurements of the JH1 Wingback Chair are approximations.

The astonishing and fascinating JH1 Wingback Chair was designed by Jaime Hayón, the renowned Spanish artist-designer. This easy chair creates a space for leisure and contemplation, inviting you to submerge in its curves and take a moment for yourself.

The base is made of brushed aluminum with a clear lacquer finish in a trumpet-shaped. The designer’s whimsical Wingback chair features a continuous flow of the shell extending downward. The delicate curves reminiscing to poised ballet shoes dancing on the floor.

This beautifully crafted chair is available in a range of colors in the finest, softest Danish Cashmere with fiberglass frame and satin finish tapered legs. The chair will definitely add an element of grandeur to your space. 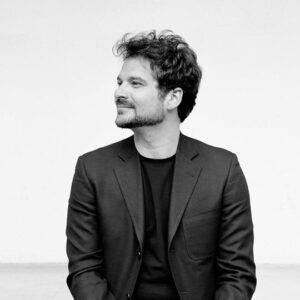 Born in Madrid in 1974, Jaime Hayón has one of the most glistening careers in recent contemporary design. Although trained in Madrid, he forged his reputation at Fabrica, the creative breeding ground run by Benetton near the Italian city of Treviso. Arriving in 1997, at the young age of 24, Hayón worked for Oliviero Toscani, who would soon place him in charge of the design department. In 2004, he decided to branch out on his own, settling in Barcelona and working on a number of projects while also exhibiting his more personal work in art galleries. The exhibition “Mediterranean Digital Baroque”, at London’s David Gill Gallery, and the bathroom collection he designed for ArtQuitect marked the start of his meteoric international rise, which was established with the Showtime collection for BD and his subsequent work with companies such as Metalarte, Camper, Lladró, Bisazza, Swarovsky, and Moooi.
Reviews (8)