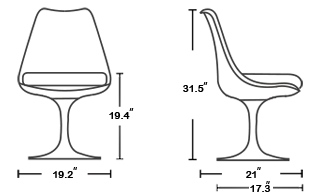 * All measurements of the Tulip Side Chair are approximations.

Eero Saarinen, a master of creating expressive sculptural forms, designed the Tulip Side Chair by taking inspiration from a drop of thick liquid. The chair stands on a graceful pedestal base that enables a 360-degree swivel.

As a part of his Pedestal Collection, the Tulip Side Chair adds the perfect modern classic touch to any dining space. Sturdy, easy to clean, and lovely to behold, these chairs elevate a meal to whole new levels of enjoyment. The chair shell is molded fiberglass with a reinforced plastic bonded finish. The upholstered foam cushion is removable, with a zippered cover and velcro fastening. Upholstery is available with a seat cushion only or with a fully upholstered inner shell. Available in an array of colors, the Tulip Side Chair makes it easy to express your individual style.

Eero Saarinen (August 20, 1910 – September 1, 1961) was a Finnish American architect and industrial designer of the 20th century with a simple, sweeping, arching structural curves or machine-like rationalism style. He believed that his clients were “co-creators,” which led him to adjust his approach to design according to what they wanted instead of strictly adhering to his aesthetic. Saarinen first received critical recognition, while still working for his father, for a chair designed together with Charles Eames for the “Organic Design in Home Furnishings” competition in 1940, for which they received first prize. “The Tulip Chair” He also have other important pieces including the “Grasshopper” lounge chair and ottoman, and “Womb” settee. His work was present from bomb disassembly manuals to Time magazine to countless editorials.
*Please note this is a not an original Tulip Table by Eeron Saarinen.
Reviews (6)