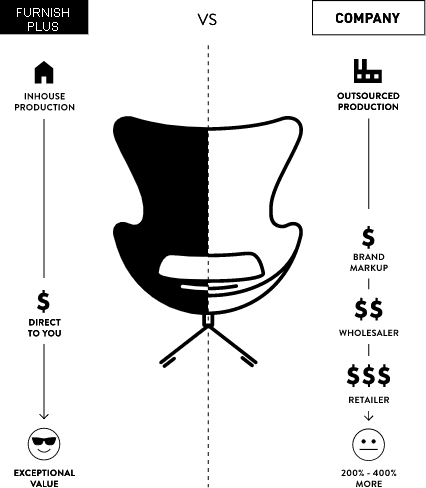 PRODUCT STORY:
Planned in 1910 by Josef Hoffmann, the Kubus Sofa shows the exceptional geometric lines and 3D squares that turned into Hoffmann’s trademark amid the mid twentieth century. His capacity to make convincing furniture utilizing clean lines and geometrical shapes set him separated from his peers and created his extraordinary style – a style that was to motivate both the trailblazers of Art Deco and the Modernist Movement. This stylish couch is framed of astounding hardwood, and upholstered in full-grain Italian leather that is extravagantly delicate to the touch. The material 3D shapes are accuracy sewed and funnelled, and make a thick group of padding that is so incredibly unwinding you’ll comprehend why this couch has been an excellent for about a century. Kubus Sofa is undoubtedly the highlight of the range: a modern work-of-art and a luxuriously functional piece of furniture all rolled into one. This is a high quality replica from the original piece.

PRODUCT DETAIL:
The Kubus Loveseat is upholstered in your choice of thick Italian leather. There are several styles and colors of leather to choose from, so you can design your loveseat to perfectly fit the look of your home, office. Built from a solid-wood frame that guarantees a stylish silhouette and geometric durability.
PRODUCT MATERIAL:
* Wood Frame provides a solid, sturdy base. * Body supported by strong wooden legs with metal feet for optimal stability

Hoffmann was born in Brtnice, Moravia (now part of the Czech Republic). He studied at the Higher State Crafts School in Brno (Brünn) beginning in 1887 and then worked with the local military planning authority in Würzburg. He designed installation spaces for Secession exhibitions and a house for Moser which was built from 1901-1903. However, he soon left the Secession in 1905 along with other stylist artists due to conflicts with realist naturalists over differences in artistic vision and disagreement over the premise of Gesamtkunstwerk. With the banker Fritz Wärndorfer and the artist Koloman Moser he established the Wiener Werkstätte, which was to last until 1932. He designed many products for the Wiener Werkstätte of which designer chairs, most notably “Sitzmaschine” Chair, a lamp, and sets of glasses have reached the collection of the Museum of Modern Art, and a tea service has reached the Metropolitan Museum of Art Hoffmann’s style eventually became more sober and abstract and it was limited increasingly to functional structures and domestic products. In 1906, Hoffmann built his first great work on the outskirts of Vienna, the Sanatorium Purkersdorf . Compared to the Moser House, with its rusticated vernacular roof, this was a great advancement towards abstraction and a move away from traditional Arts and Crafts and historicism. This project served as a major precedent and inspiration for the modern architecture that would develop in the first half of the 20th century, for instance the early work of Le Corbusier. It had a clarity, simplicity, and logic that foretold of a Neue Sachlichkeit. Some of Hoffmann’s domestic designs can still be found in production today, such as the Rundes Modell cutlery set that is manufactured by Alessi. Originally produced in silver the range is now produced in high quality stainless steel. Another example of Hoffmann’s strict geometrical lines and the quadratic theme is the iconic Kubus Armchair. Designed in 1910, it was presented at the International Exhibition held in Buenos Aires on the centennial of Argentinean Independence known as May Revolution. Hoffmann’s constant use of squares and cubes earned him the nickname Quadratl-Hoffmann (“Square Hoffmann”).
Reviews (0)

Be the first to review “Kubus Loveseat” Cancel reply