* All measurements of the FK Lounge Chair are approximations.

Preben Fabricius and Jorgen Kastholm are both Danish designers from the 20th Century. The duo is renowned all over the world. Their style is inspired by functionalism and modernism, to devise everlasting functional designs that were uncomplicated and possessed the minimalist aesthetic.

In the late 1960s, the two talented designers succeeded in designing one of the icons of design history, its original – the FK. The bucket seat stands for classic design, as well as being a beacon of modernity and a shining example of minimalism. In 1969, the chair was the first recipient of the Federal Prize for “Good Form” in Germany.

The FK Lounge Chair with its archetypal tulip styling is considered a furniture design classic, a timeless piece of furniture that would complement any home or professional setting. The seat cushion is loose and fully upholstered with genuine Italian leather. A leather cord is wrapped around the armrests as a finishing touch. 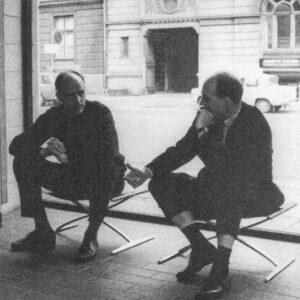