Hello again from Furnish Plus,

It is another Friday, and we cannot be happier to once again bring you insight into some of the furniture designs that we’ve had a chance to.

For this week’s blog, let Furnish Plus introduce you to another wizard Danish designer – Hans J. Wegner, and his magnificent pieces: WishBone Chair and Oculus Chair, sibling to the Wing Chair. 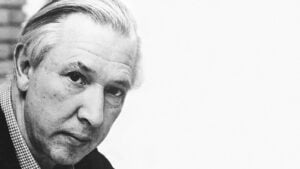 To name a few most famous Danish designers of all time, Poul Kjærholm, Arne Jacobsen, Poul Henningsen, etc. Hans J. Wegner (1914-2007) is recognized for being the most inventive,  visionary, and prolific. During his prime, people usually called Wegner the chair guru, there were about five hundred creations throughout his lifetime– and many of them became masterwork.

Our personal favorite choices for this blog will be the Oculus Chair and Wegner’s iconic Wishbone Chair, the most well-known and both are in reproduction since the 50s. 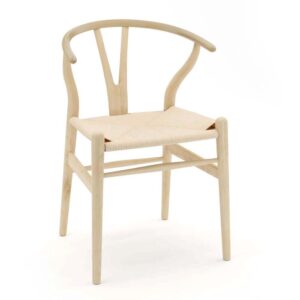 Wegner was part of the exquisite era that influenced what is today referred to as ‘the Golden Age’ of modern Danish design. Sharing with the press, he once said: “Many foreigners have asked me how we created the Danish style, I do believe that our regular reaction would be “Because he is Danish obviously”, but here are what he answered,

“And I’ve answered that it was a continuous process of purification and of simplification – to cut down to the simplest possible design of four legs, a seat, and a combined back- and armrest.”

In 1938, Wegner was approached by architects and designers Arne Jacobsen and Erik Møller and started designing furniture for the new Aarhus City Hall. During the same period, Wegner began collaborating with master cabinetmaker Johannes Hansen, who was notorious for his contribution to the Copenhagen Cabinetmakers’ Guild Trade Shows.

The foundation of Wegner’s legacy is his focus on showing the characteristics of the objects through an elegant, clean and practical exterior. Wegner’s background as a cabinetmaker granted him an insight into assimilating exacting joinery techniques with exquisite form. His philosophy of art established deep respect towards wood distinct patterns, and a vast curiosity about other natural materials that enabled him to bring an organic, natural softness to formalistic minimalism.

Wegner opened his own design studio in 1943 and graced a series of light-looking chairs for Carl Hansen & Søn for roughly 10 years from the 1950s to 1960s, where the well-known Wishbone Chair that we’ve seen in many design magazines nowadays.

Wegner is seen as one of the most renowned and creative Danish furniture designers. He received many design awards, including the Lunning Prize in 1951, the Grand Prix of the Milan Triennale in 1951, the Royal Danish Academy of Fine Arts’ Eckersberg Medal in 1956, Sweden’s Prince Eugen Medal in 1961, the Danish Furniture Prize in 1980, the C. F. Hansen Medal in 1982, and the 8th International Design Award in 1997. He was made an Honorary Royal Designer for Industry by the Royal Society of Arts in London in 1959, became an honorary member of the Royal Danish Academy of Fine Arts in 1995, and was awarded an honorary Doctorate by the Royal College of Art in 1997.

Almost all of the world’s major design museums, from the Museum of Modern Art in New York and Designmuseum Danmark in Copenhagen to Die Neue Sammlung in Munich, exhibit his works. Hans J. Wegner died in Denmark in January 2007, aged 92.

Wishbone Chair – Story behind that chair that took over the world 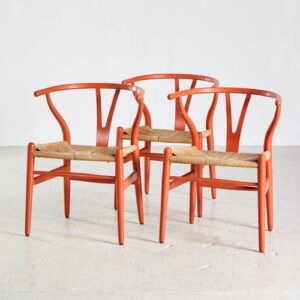 “Just sitting in this chair gives me a wonderful feeling! The peculiar design is lovely, the mix of materials, the somewhat modern yet rustic look. The interesting contrast between the natural hemp seat and the solid wood finish complements the modern decor of my home exquisitely. Everything comes together so well. Comfortable and stylish, and best of all, reasonable pricing. Great way to spruce up my apartment.”

The Wishbone Chair extends Hans Wegner’s successful career as one of the most desired commercial chairs. With inspiration from the Ming Dynasty, the Wishbone was the last of the series that was designed in the 1950s. It was initially produced by Carl Hansen & Søn, a long partnership of his. The chair is the ultimate manifestation of superior craftsmanship, detail, attentiveness and manufacture, generous proportions, comfort, and texturally pleasing materials that contribute to the perception of Scandinavian design as particularly human-centered, modest, and well made.

When making the Wishbone Chair (also called the CH24), Wegner decided to incorporate the back- and armrest into one piece. With the firmness made to the steam-bent top and ensuring comfortable support, Wegner developed the characteristic Y-shaped back that the Wishbone Chair is named after.

It was estimated to include almost 100 strides to produce each Wishbone Chair, most of which are done by hand. The wicker seat alone requires approximately 120 meters of paper cord, the exceptional durability, and stability of which makes the chair both strong and long-lasting, regardless of its fragile look. The Wishbone Chair overtures amenity and stability, also delightful beauty desires for distinctive, elegant structure. 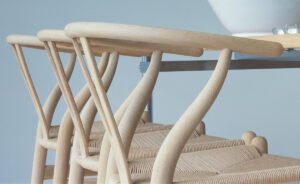 Over time, the Wishbone Chair has been widely known as the dream chair, especially for living room and dining room space, capturing the principle of modern Danish composition.

The story of how this chair was produced is quite interesting. It was during Carl Hansen & Søn’s visit to Wegner’s studio that the design of the easy chair caught their attention. After studying his original drawing for this design, the manufacturer spent time studying a full-size precursor, and the draft for Oculus was created and started to be in the production process in the 1960s. 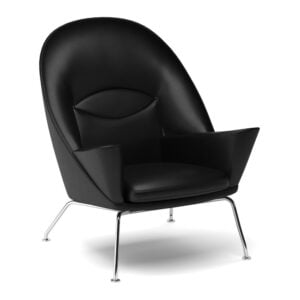 Oculus is the Latin word for eye and refers to the eye-shaped stitching in the chair’s back upholstery. The design works to ensure that the shoulder blades can fall back comfortably into the chair creating rest for both the neck and back. The distinctive design with the spacious back, the sloping armrests, and the soft seat cushion have made the Oculus Chair popular.

The impressive upholstered upper chair shape is emphasized by the sleek-looking stainless steel frame with sloping legs. With its sculptured silhouette and fine seating characteristics, the Oculus Chair will be the natural focal point in any room, both standing individually or in a group.

The chair is now available at Furnish Plus’s website at: https://furnishplus.ca/product/oculus-chair-hans-j-wegner/, in various options for cashmere textile and leather.

If you are looking to buy chairs for your dining table, patio or simply for your living room there are many different types of materials to choose from. However, if you want actual value...