* All measurements of the Pelican Chair are approximations.

Recognized for its unusual shape and sturdy legs, the “Pelican Chair” as dubbed by many, was first presented at the Copenhagen Cabinetmakers’ Guild Exhibition in 1940.

The oversized frame is full of character, playful but remains soft and organic. Graceful curves embracing the sitter offer a cradling comfort, almost like giving you a hug from behind. The sculptural chair fits seamlessly into the most modern interior design style. The Pelican Chair is still unconventional by any time period’s standards. With delicate curves that embrace the sitter, Pelican stays true to Juhl’s belief that a chair is its own form and space and not just a decorative piece. 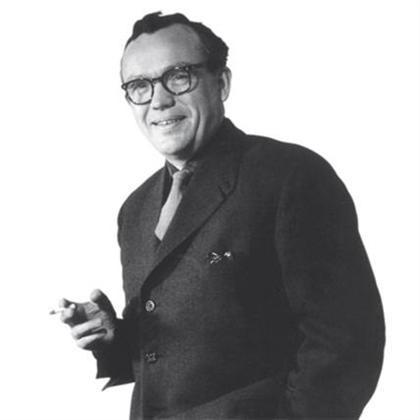 When you look at the refined shapes and elegant curves of Finn Juhl’s work, you will realize that he was a pioneer in his time. He is one of the few, credited for introducing Danish modern to mid-century America.

Persuaded by his father, a once aspiring art historian attended the Royal Danish Academy of Fine Arts School of Architecture. By 1934, he had a prestigious position with architect Vilhelm Lauritzen and was exploring the functionalism movement by creating clean, geometrical buildings like the broadcasting house Radiohuset, a pinnacle of Danish architecture that now houses the Royal Danish Academy of Music.

Juhl pride himself in being an architect of the exterior as well as the interior. Juhl felt that art, handicraft and furniture should incorporate seamlessly in the house, which in his case was adorned with works by Danish painters of the time. Today, the Finn Juhl House – an early example of open-plan design with views to its garden from every room – is part of the Ordrupgaard Museum.

In 1937, Juhl began collaborating with master cabinetmaker Niels Vodder, and the pair was the buzz of the 1945 Cabinetmakers’ Guild exhibition with their expressive, sculptural pieces. At age 39, Juhl made his U.S. debut in 1951 at the Good Design exhibit in Chicago and at MoMA in New York, and he represented Denmark in creating the interior of a meeting hall at the United Nations headquarters. A few years later, SAS asked Juhl to redesign the interior of its air terminals in Europe and Asia.

Finn Juhl is still winning awards decades after his death: The Wallpaper Design Award 2010 was awarded to the Baker Sofa (1951) in the category of Best Reissue.