* All measurements of the Larsen Easy Chair are approximations.

The Larsen Easy chair by Ib Kofod-Larsen in 1953 has become a true icon over time. The chair is made up of plywood-molded back and a thin structure holding a generous seat. Its playful shape is as if a little penguin is about to embrace you when you sit down. This is how you are going to feel when sitting down on the Larsen Easy Chair, comfortable and cradled.

Larsen is recognized for his use of rich, durable materials such as teak and the highest quality leather. He is known for complementing these distinguished materials byways of his aesthetics, leaving the composition or other attributes to speak for themselves. 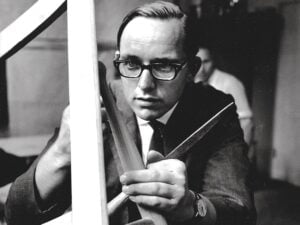 Ib Kofod-Larsen, born in 1921 in Denmark, studied at the Danish Royal Academy in Copenhagen. In 1948, he won the Holmegaard glassware competition and the annual cabinetmakers’ guide. This is how the Danish furniture manufacturer Faarup the MøBelfabrik stands out. Kofod-Larsen creates some of his finest works for the Danish company.  He was one of the pioneers of the Danish modern in the 1950s. Kofod-Larsen received his architecture degree from the Royal Danish Academy, and he also worked as a designer – one of his best-known works is the Knitting Chair from 1951. Rather than a regional phenomenon, Kofod-Larsen saw Scandinavian design as part of international modernism, and he became one of the best-selling Danish architects in the United States in the 1950s. Kofod-Larsen often works with precious woods, such as teak or rosewood, as well as rich leathers. His work is characterized by clean and sculptural lines.
Reviews (5)