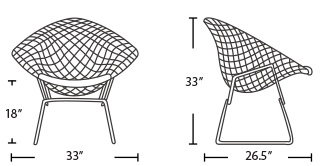 The Harry Bertoia Diamond Chair has an exquisite, artful construction and a tranquil seat, the leading icon of the 1952 Bertoia Seating Collection. The frame may appear delicate, however, it is unexpectedly strong and durable. Bertoia found great elegance in an industrial material, elevating it beyond its normal utility into a work of art. His wire chairs are considered one of the most acknowledged accomplishments of mid-century modern design.

The unique form and a canted seatback make this unrestrained airy seat perfect for leisurely lounging. The diamond shape creates a deep seat that allows the sitter to really sink in and relax. The designer’s work in molding and casting goes on to be one of the few emblematic contributions to modern furniture design. The soft pad seat is hand-stitched and upholstered with premium Italian leather. With its classic, modern design this piece will enhance any environment. 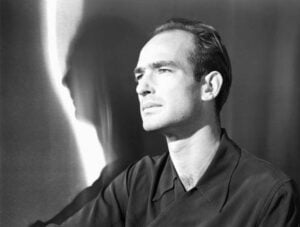 Harry Bertoia (1915-1978) was an Italian-born artist, sculptor, and modern furniture designer.At the age of 15, he traveled from Italy to Detroit and enrolled in Cass Technical High School, where he studied art and design and learned the art of making handmade jewelry. In 1938 he attended the Art School of the Detroit Society of Arts and Crafts. The following year he received a scholarship to study at the Cranbrook Academy of Art where he encountered Walter Gropius and Ray and Charles Eames for the first time.Opening his own metal workshop in 1939 he taught jewelry design and metalwork. Later, as the war effort made metal a rare and expensive commodity he began to focus his efforts on jewelry making, even designing and creating wedding rings for Charles and Ray Eames. In 1943 he married Brigitta Valentiner and moved to California to work with Charles and Ray for the Evans Product Company. At this point, they began to experiment with molded plywood under the auspices of their Plyformed Products Company.
Reviews (9)