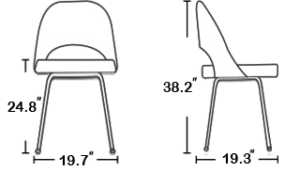 * All measurements of the Saarinen Executive Stool are approximations.

In the 1930s, Eero Saarinen in a collaborated effort created a range of organically shaped plywood chairs. These went on to win the MoMA-sponsored 1940 Organic Design in Home Furnishings competition. This work inspired Saarinen to design a chair that would provide exceptional comfort from its shell alone, and not just from the furnishing. His luxurious and sculptural Executive Side Chair and the matching Executive Armchair were the results. The design won the 1969 Museum of Modern Art Award and the West Germany Federal Award for Industrial Design.

The shells for these chairs were originally made from fiberglass but were later changed to polyurethane to increase flexibility. The lustrous metal base version of the Saarinen Executive Side Chair features stainless steel legs and flat-base floor glides. High elasticity dacron-wrapped foam cushioning with a down-like feather layer. This classic design offers refinement and pragmatic use for your office or home settings. 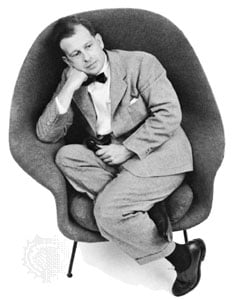 Eero Saarinen (August 20, 1910 – September 1, 1961) was a Finnish American architect and industrial designer of the 20th century with a simple, sweeping, arching structural curves or machine-like rationalism style. He believed that his clients were “co-creators,” which led him to adjust his approach to design according to what they wanted instead of strictly adhering to his aesthetic. Saarinen first received critical recognition, while still working for his father, for a chair designed for the "Organic Design in Home Furnishings" competition in 1940, for which they received first prize. “The Tulip Chair” He also has other important pieces including the “Grasshopper” lounge chair and ottoman, and “Womb” settee. His work was present from bomb disassembly manuals to Time magazine to countless editorials.
Reviews (7)