* All measurements of the Orange Slice Chair are approximations.

The Orange Slice was designed in 1960 by Pierre Paulin as an eternal icon that inspired and influenced many after it was created. From different angles, the Slice chair displays different periods of the peel curling up. Looking at it will always give you a feeling of freshness for it seems to change shape every time. Pauline studied clay molding and stone carving in France and applied the methods in all of his designs. The Orange Slice is a prime example of his principles.

The whimsical composition consists of two indistinguishable shells of molded fiberglass, covered with polyurethane foam on a chrome metal tubular base.

More of our Lounge and Armchairs. 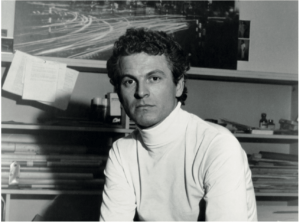 Born to a French father and a Swiss-German mother, Pierre Paulin (1927-2009) grew up in France, under the inspiration of his two uncles. His paternal uncle, Georges Paulin, invented the Eclipse mechanical folding roof system and, working with Peugeot, Bentley, and Rolls Royce, provided a role model for creativity in business. His great uncle Freddy Stoll was a sculptor and instilled in a young Paulin the notion that an object should be beautiful from every angle.

Pierre studied in France – first ceramics in Vallauris and then stone-carving in Burgundy, intending to become a sculptor. Sadly, a severed tendon in his right arm put paid to his intentions to follow in his great uncle’s footsteps. He then enrolled at the École Camondo design school in Paris, where a teacher urged him to join furniture designer Marcel Gascoin’s workshop. He served as an apprentice and learned his trade before traveling to Scandinavia and the United States. He cited Ray and Charles Eames and George Nelson among his influences and, like Nelson, considered himself a functionalist who added “two little drops of poetry” to his work.