* All measurements of the Grasshopper Pendant Lamp are approximations.

The Grasshopper Floor Lamp designed by Swedish architect Greta Grossman stands on a distinct tripod stand that leans back, giving the effect of the fixture is animated. The lamp resembles the form of its namesake with a tubular steel frame and prolonged and coned shape. The ball-jointed shade can rotate 360 degrees to focus light anywhere you wish and minimize glare. 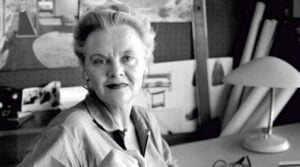 Greta Magnusson Grossman (1906–1999) maintained a prolific forty-year career on two continents: Europe and North America. Her achievements were many and include industrial design, interior design, and architecture. In 1933, after successfully completing her fellowship at the renowned Konstfack University College of Arts, Crafts and Design, in Stockholm, she opened Studio, a combined store, and workshop. During the same year, she married the jazz musician Billy Grossman with whom she later emigrated to the United States, settling in Los Angeles. Through the ’40s and 50’s Greta Magnusson Grossman exhibited her designs at museums worldwide, including MoMA in New York and The National Museum in Stockholm.
The most iconic products Greta Magnusson Grossman designed in the ’40s and ’50s were the Grasshopper floor lamp and the Cobra floor and table lamps. In 1950, the Cobra lamp won the Good Design Award and was subsequently exhibited at the Good Design Show at the Museum of Modern Art. Greta Magnusson Grossman was highly influenced by European Modernism, which had been imported to the US by influential architects, such as Walter Gropius (founder of the Bauhaus) and Ludwig Mies van der Rohe. Greta Magnusson Grossman, in turn, played a significant role in defining the aesthetic of mid-century Californian Modernism.The iconic Grasshopper lamp was first produced in 1947. The tubular steel tripod stand is tilted backward and the elongated aluminum conical shade is ball-jointed onto the arm, so the light can be directional, yet the glare is minimal. Both stand and shade are powder-coated. Today, Greta Magnusson Grossman’s product designs are highly collectible and are sold at auctions all around the world. Greta Magnusson Grossman’s products are unique, modern classic designs.
Reviews (6)