* All measurements of the Cesca Armchair are approximations.

The Cesca Chair was created by Marcel Breuer in 1928, following the success of his iconic Wassily Chair. The chair was named after his daughter Francesca.

As one of his most revolutionary architectures, the Cesca Chair features a unique simplicity to its design with a cantilever form that seems to hover in the air. Wicker caning seat and back underlined by a wooden frame. The subtle curves with the interesting mix of materials, making Cesca Chair an epic composition of contrast. The tubular steel frame that pairs with natural material (cane and wood) almost seems simple, yet outstanding. The chair resonates with modern furniture lovers now just as much as it did over 90 years ago.

This chair can grace private residents perfectly as well as public settings such as restaurants and cafes. 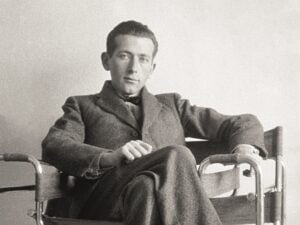 Marcel Breuer (1902- 1981) was born in Hungary and later studied and taught at the Bauhaus in Dessau. There, he became one of the very first designers who would create furniture with tubular steel. Apparently, his Adler bicycle's elegantly curved tubular steel handlebars inspired him to work with this material. The process of manufacturing seamless, tubular steel had just been invented by the German steel manufacturer Mannesmann.For the auditorium in Dessau, Breuer developed several different pieces of furniture, all of which were lightweight, affordable, and hygienic. At that time, this was absolutely revolutionary for many reasons. It used new materials like leather or bent steel, and most importantly, it looked absolutely different than anything else that had ever been designed before. As such, it does not seem surprising that Marcel Breuer’s creation evaded popularity, much to his disappointment.   After his Bauhaus career, Breuer spent some time in Berlin, designing private residences, buildings, and commercial spaces. Later in his career, he also created innovative wooden furniture but his most famous design is definitely the Wassily Chair.
Reviews (8)